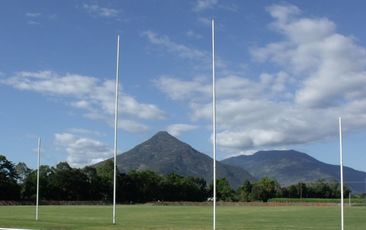 In just a few years our club has tasted success on many levels. From representative selections to finals, Pyramid Power has already written its own pages in the history of the club and also AFL Cairns Juniors.

In 2010, on one of the wettest August days on record, the Pyramid Power Under 14 team ran on to Cazaly's Stadium and defeated Cairns Hawks for our first ever premiership.

In 2013, 2 of our sides made the Grand Final, and both recorded fabulous victories, to etch their names in Pyramid history, becoming the second Under 14 Premiership and the first Under 16 Premiership for the club.  The club has now contested 6 Grand Finals, winning 3 of them.

In 2015 our Under 13 team had an incredible mid-season turn around to capture the club’s 4th premiership flag.

Over the years our club has also produced players of the highest calibre selected to represent our nation in the Flying Boomerangs national indigenous team.

In 2018 in only the second year of the newly created Under 14 girls competition our girls claimed the flag.

Also in 2018 our Men's Reserves Team in only their third year in competition came from fourth position and definitely the underdogs burst through the finals series games with force claiming the premiership flag.